The Golden Age of Lonnie Donegan 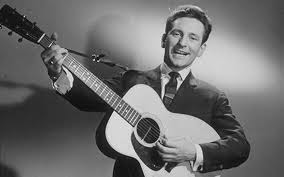 While I was visiting local charity shops in Glasgow on Saturday Mrs CC was doing likewise in Troon when out with her mum and brother.
She came back with a Jack Johnson CD for herself (which she already has!) and The Golden Age of Lonnie Donegan for me.
A superstar in the late 50's the King of Skiffle was actually born in Glasgow prior to moving to London aged 2. Like David Byrne later on we still claim him as one of our own.
He released some cracking songs such as the two below  and the Wabash Cannonball.

However,sadly, like Chuck Berry and My Ding-a- Ling he is probably best remembered for My Old Man's a Dustman and Does Your Chewing Gum Lose It's Flavour.
Let's remember the good stuff