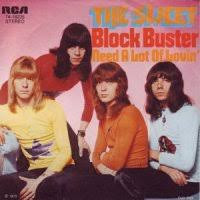 Block Buster! by Sweet was released on 13th January 1973 when I was 12. I can remember dancing to it at my primary school disco.
It was brilliant then and is still brilliant now 44 years later.
It was their only UK number 1 single but they did manage to hit the number 2 spot on at least 5 occasions one of which being the equally brilliant Ballroom Blitz.
A Chinn and Chapman number - obviously
The b-side Need a Lot of  Lovin' shows their slightly rockier side that they had before Glam Rock and which they subsequently reverted back to when the glitter and flares were all gone

We just haven't got a clue what to do.

There is confusion as to whether or not lead singer Brian Connelly was the half brother of Taggart star Mark McManus or whether he was fostered by the McManus family. Both sadly succumbed to alcohol in the end.