The First Record Played in 2018 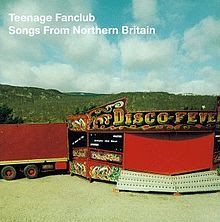 The first record to (gently) shatter the New Year tranquility at CCM HQ was Songs from Northern Britain the 6th studio album by Teenage Fanclub released in 1997. 21 years ago so you can argue that it has come of age.

It wasn't that well received by the critics at the time but what do they know. For me it's up there and depending on my mood sometimes their best.An argument for the pub I feel.
No hangover to report on New Year's Day but if I had this would have been the perfect remedy..

The band members share the songwriting credits but on this album, as indeed on others, I find myself graduating to the songs by Gerard Love.Another pub argument topic

Teenage Fanclub - Take The Long Way Round
Posted by Charity Chic at 08:00