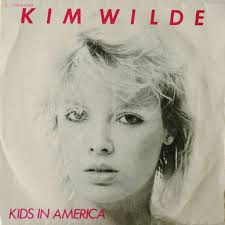 A New Year - a new series.
Popped into my local charity shop yesterday and someone had handed in a pile of singles in reasonable  condition and at 50 p a pop. So I picked up a few which I will feature over the next few weeks.

First up is Kids in America  the debut single from Kim Wilde on the RAK label.Released on 26th January 1981 it reached number 2 in the UK singles charts during a 13 week stint.
The first of her 25 singles in the top 50 and along with You Keep Me Hangin' On  her biggest hit. Sadly for her she never quite made the top spot.

She is now a horticulturalist (winning a gold award at the Chelsea Flower Show) and a TV and radio presenter. She is also still making music with a tour scheduled for later on this year.

Kim Wilde - Tuning In Tuning On