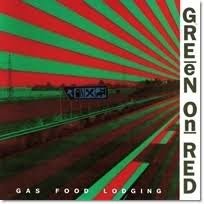 My Chuck Prophet post the other day awoke some brain cells from their festive slumber - particularly those of the gentlemen named above.
They all got quite excited at the thought of  Green on Red and in particular their 1985 album Gas Food Lodging and in Dirk's case the opening track That's What Dreams.

My copy is a second hand one from  Missing Records which was a bargain at £1.99 and I was fortunate enough to see them play at King Tuts on 4th September 2006.

When you google Gas Food Lodging  the first  reference is to a 1992 film about a waitress trying to find romance while raising two daughters in a trailer park.
Something wrong there surely but I wouldn't be surprised if it took it's name from the  classic album by a brilliant band.

Green on Red -That's What Dreams