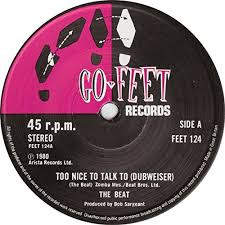 It's about time that Ska revival band The Beat graced these pages once more.
Their debut single  from 1979 Tears of a Clown/Rankin' Full Stop is on the mighty 2 Tone label and reached number 6 in the UK singles chart.
Thereafter they set up their own label Go- Feet which predominantly featured their own records and also  singles by The Mood Elevators  and Pato & Roger and a couple of singles and an album by Cedric Myton & the Congos

Sadly still on the go on the retro circuit with two competing versions featuring former band members.
Let's remember them as they were.