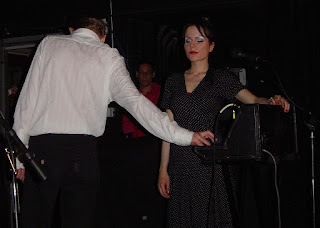 A guest contribution from George


The Fall were a bloody brilliant band. Or maybe I should say they were a series of bloody brilliant bands given the line-up changes.  “If it’s Mark E Smith and your granny on bongos, it’s the Fall”, but I never got to hear that particular version of the band, although it would have been great to see my Nanna, who would outsmoke Mark E Smith, on stage with her packs of Silk Cut and a glass of sherry, on the bongos whilst Smith had his back turned to the audience.

The records kept coming, for almost 40 years, at times great (The Unutterable, Your Future Our Clutter) and at times a bit less so, but that run of albums from Live At The Witch Trials, in 1979, to The Infotainment Scan in 1993 rarely had a duff track on them. And you couldn’t ask for much more from a band. For me it's the music, the lyrics are always secondary, which is just as well given that at best only half the time  can I make out what the hell Mark E Smith is shouting about. And even when I can make it out, say on Garden (Perverted by Language), I've no idea what the hell it's about. And sometimes, when I'm lucky, it can always make me smile,
"Make joke records, hang out with Gary Bushell,
Join round table. "I like your single yer great!"" on C'n'C-S Mithering (Grotesque).
But it's the music, always that relentless relentless relentless repetition, on O.F.Y.C Showcase (Your Future Our Clutter), or Pacifying Joint (Fall Heads Roll), or No Bulbs, a song it is impossible and it should be illegal to not PLAY LOUD,  or, or, or,...Repetition (77-Early Years-79), it's always the music for me.

You don’t have to like the personnel to like the music, which was just as well really, but I suppose there comes a point when the person’s actions go too far for us to listen to the records anymore. Maybe. After all, I suspect I’m not the only one who still plays Phil Spector-produced records; R.L.Burnside killed someone in a dice game. And Mark E Smith seemed to have some nasty violent habits, and hold some distasteful views, but that’s not going to stop me playing Live At The Witch Trials and shouting along to Mother Sister, blasting out The Lay Of The Land, the first Fall song I ever heard, almost shiver with pleasure as Cyber Insekt vibrates the walls. Mark E Smith didn’t mean anything to me, I never met him, never wanted to, I didn’t even want to go see the band in concert after about 2007,  but I always wanted to buy his records.

Always different, always the same
Posted by Charity Chic at 18:38