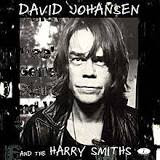 I doubt that anyone who witnessed the excesses of the New York Dolls in the early 70's would have put much money on David Johansen still being around in the year 2000 far less releasing an album of raw Blues songs.
The first of two albums inspired by the release of The Anthology of American Folk Music a compilation of 1920's and 30's songs assembled by the musicologist Harry Smith hence the band name.
In the interim he had a number of jazz and lounge albums under the name of Buster Poindexter

From this
New York Dolls - Who Are The Mystery Girls?

The sound of a man getting old gracefully or should that be disgracefully?