Let The Side Show Begin 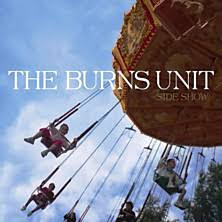 Apologies to anyone tuning in and expecting to hear Barry Biggs.
Side Show was a 2010 album by Scottish/Canadian super folk group The Burns Unit.
I got it out the library shortly after it's release and it has always been an ambition to replace it with a physical copy.
It was never quite top of my wish list and always fairly expensive. I played it just after New Year and checked the price to find it was pretty reasonable and swooped.
The collective consisted of Emma Pollock, Future Pilot A.K.A., King Creosote, Kim Edgar, Karine Polwart, Mattie Fouls, Michael Johnston and MC Soom T who had originally met at Burnsong a Scottish songwriting retreat
They played a few gigs and festivals but only ever recorded the one album.
KC and KP take the lead on the first track featured and Soom T on the second.

The Burns Unit -Since We've Fallen Out

The Burns Unit - Send Them Kids to War