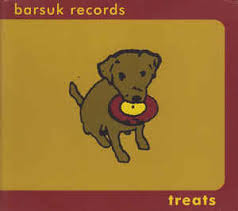 Some midweek Treats for you today courtesy of Seattle record label Barsuk.
Now as everyone knows barsuk is the Russian word for badger as in Tim Barsuk. However the label is not if fact named after our black and white furry friends but after the black Labrador belonging to the labels owners hence the cute cover. Glad we got that sorted.
Founded in 1998 they have a pretty impressive stable of artists

Here are three of the better known ones. Nada Surf (from the 2002 album Let  Go), Rilo Kiley (from 2001's Takeoffs and Landings ) and Jesse Sykes & the Sweet Hereafter (with the title track from 2002's Reckless Burning).

I've tried unsuccessfully to burn this sampler a few times before This time I struck lucky.

Nada Surf - Inside Of Love