If We Can't Trust The Doctors 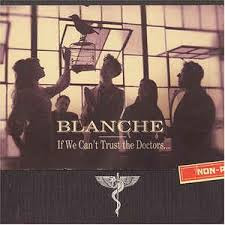 About a dozen or so years ago I went to see  Detroit based Americana/Southern Gothic band Blanche play at the Barfly in Clyde Street, Glasgow.
They, and the lead singer Dan John Miller in particular, were totally obnoxious treating their audience with total disdain.
Which is all a bit of a pity given that their 2004 debut album If We Can't Trust The Doctors on Loose Records is actually rather good .I was reminded of this record as I have just filed The Bottle Rockets next door to it.
Here are a couple of songs from said album including a cover of The Gun Club's Jack on Fire from the classic Fire of Love.

Blanche - Who's To Say