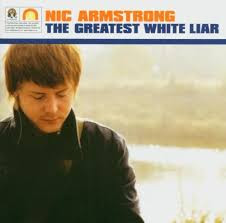 I can't remember whether it was by accident or by design but I once witnessed an absolutely incendiary concert at King Tuts by Nic Armstrong and his band the Thieves.
It was 60's throwback stuff with more than a passing nod to the blues and it was absolutely superb.
I eagerly awaiting the arrival of his debut album The Greatest White Liar which was released in April 2004 on One Little Indian records.
I must admit to being a tad disappointed when I heard it. Not because it is a bad album but because it came nowhere near  to the live experience.
Then I saw them again in the Barfly and sadly that gig was not a patch on the first time round.
We went our separate ways thereafter.Originally from Newcastle they are now based in Austin, Texas.

I guess it was just one of those special nights that you get from time to time.

Nic Armstrong - I Can't Stand It

Nic Armstrong - Down Home Girl
Posted by Charity Chic at 08:00