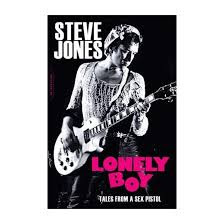 I thought I would start with something less taxing Lonely Boy the memoirs of former Sex Pistols guitarist Steve Jones lent to me by my brother.
It is a pretty easy and entertaining read - the usual sex and drugs and rock'n'roll cliches with some childhood abuse and neglect, voyeurism and thieving thrown in for good measure.Amusing and toe curling on occasions and he is brutally honest as to his foibles.
He has come out the other end and is now sober and a successful radio presenter in Los Angeles with his Jonesy's Jukebox show.

It spurred me into featuring something from Never Mind the Bollocks which I have been meaning to do for a while.There are two copies on the shelves- one of which probably used to belong to my brother.

Sex Pistols - Anarchy in the UK
Posted by Charity Chic at 08:00