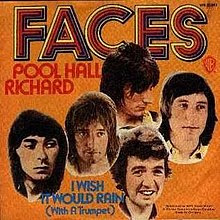 This second recently acquired single is one which will please Walter who I know is a big fan.
Entering the UK singles  chart on 8th December 1973 Pool Hall Richard by The Faces remained there for  11 weeks peaking at number 8.
All Music critic, Stephen Thomas Erlewine, described the song as unremarkable. He's wrong there it is a terrific tune. From when Rod was good.
The B side is a credible live cover of the Temptations song I Wish It Would Rain.

My copy (as was the case with Kim Wilde) has a plain paper sleeve as opposed to the picture sleeve featured above.Ronnie Laine appears on the sleeve but does not appear on the record as he had left the band before it was recorded and released as a single.

Another one next Sunday.

The Faces - I Wish it Would Rain
Posted by Charity Chic at 08:00