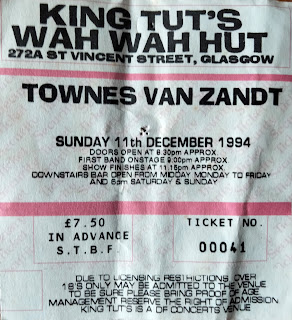 For the second week in a row a grizzly Country veteran albeit this one was held in the highest of regard by the Alternative Country set.

I feel privileged to have seen Townes Van Zandt live twice before his death on 1st January 1997 at the age of 52. The first time was the one above at King Tuts with the second being a year or so later at the County Hotel, Perth

It is fair to say that my pals and I were in an advanced state of excitement  for getting to see an actual living legened championed by Steve Earle, Emmylou Harris and anyone else you care to mention.The peak of his recording career was the late 60's and the 70s but due to his complicated financial situation he was a prolific live act as it constituted his main form of income.

He had actually released at album No Deeper Blue in 1994 which was his first studio album for seven years and I would imagine that one of the purposes of the tour was to promote it. Sadly it was to be be the last one released prior to his death. As is the way of things there were a good few releases and re-releases thereafter.

From memory he was in good form with all the classics getting an outing. During his lifetime he probably earned more from others recording of the likes of Pancho and Lefty, Tecumseh Valley and Kathleen than from his own original versions. It was great to hear them being sung by him though.

As I said I only saw him twice but for a number of years there was an annual quickly sold out tribute concert at Glasgow's Riverside Club where artists including Dean Owens would pay homage by covering his songs. Such is the legend of the man.

I can feel a Townes Songs Covered series coming along!