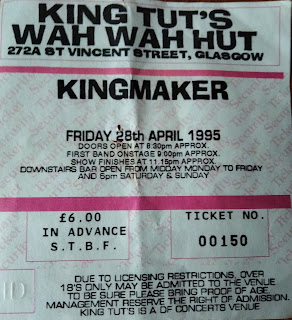 The only reason that I can think for as to why I went to see Kingmaker is that I have a CD single/EP of theirs called Queen Jane. They were a trio from Kingston upon Hull who were active from 1990 to 1995 releasing three albums in the process.

The EP is from 1993 the year after they toured with Radiohead as support. The track Queen Jane appeared on their second album Sleepwalking which got to number 15 in UK albums chart. Their third album In the Best Possible Taste was released on 17th April 1995 and clearly this tour was to promote it. It appears that I wasn't impressed enough to pick up a copy at the show.Coincidentally, or probably not, they split up shortly after.

Scott from Spools Paradise commented on a previous post that he was also at this concert and pretty accurately described them thus they were never going to be massive but they had a few good tunes..

The EP is the only thing of theirs that I physically have.It is part 1 of a two CD set and is contained in a double CD box with a cardboard cut out of CD 2 which apparently was available next week. These are some of their few good tunes The less good You and I Will Never See Things Eye to Eye  from the final album is also attached.

Kingmaker - You and I Will Never See Eye to Eye