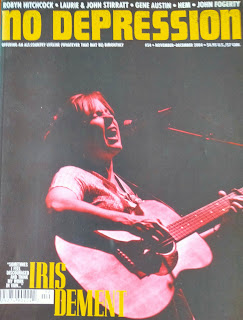 #54 -   November to December  2004
October 2004 saw the release of  Lifeline the 4th album by Iris DeMent following a gap of 8 years due to writers block. The timing of the release  explains why she is the cover star and the subject of the main article in this issue of No Depression.
Disclaimer - I don't have and have not heard this album. My Iris DeMent collection consists of her first three records - Infamous Angel (1992), My Life (1994) and The Way I Should (1996). It  looks like the writers block may have been a recurring theme given that she has subsequently only released a further two albums Sing the Delta (2012) and  The Trackless Woods (2015 -  where Iris sings the lyrics of translated poems by Anna Akhmatova).
It seems that Lifeline is primarily a series of traditional Protestant gospel songs which she would have been familiar with given her Pentacostal background.
We went to see Iris at Celtic Connections in 2020 and while I enjoyed it I was not familiar with the majority of the songs.
Folk Radio UK wrote that she gave  a profoundly satisfying performance at the crossroads of country, folk and gospel, playing intricate melodies and singing in an edgy, versatile voice that sounds alluringly rooted in the past.
As I am not familiar with Lifeline I have opted to feature a song from each of the first three albums in the order that they were released
She declined to play a concert on 21st March 2003 the day the US commenced war on Iraq which irritated right wing commentators no end. It was not her first controversy with the right. Florida Republican senator John Grant (no, not that one!) took great offence to Wasteland of the Free  being played on the Tampa public radio station and led a successful campaign to eliminate the station's primary source of funding.WMNF raised the necessary funds to keep the station on air with Iris performing a benefit concert. State funding has since been restored. All of this means that I now hold her in even higher esteem than before.
For my One from the Top I am going for the great Robyn Hitchcock whom I'm looking forward to seeing live for the first time in May and which I am looking forward to immensely.
Iris DeMent - Our Town
Iris DeMent - Sweet is the Melody
Iris DeMent - Wasteland of the Free
Robyn Hitchcock - Belltown Ramble
Posted by Charity Chic at 08:00