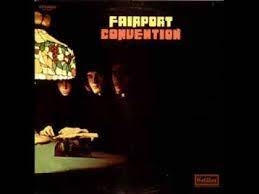 Someone, and apologies I can't remember who, recently commented on a blog that the first five albums by Fairport Convention were available for a reasonable price as one of those Five Classic Albums CD boxsets. Given that the only physical thing I had by them was the the CD compilation The History of Fairport Convention that was enough for me to press the trigger. It is also the next five Fridays sorted!

The self -titled first album was released in June 1968 on the Polydor label with a line up of Judy Dybie, Ian MacDonald (aka Iain Matthews), Richard Thompson,Simon Nicol, Ashley Hutchins and Martin Lambie

It is not the electric traditional folk for which the band rightly became famous for. George in his Second is Better than First series on these pages compared it less that favourably against it's immediate successor What We Did On Our Holidays. His comment that its  lack of consistency in musical style makes it almost a compilation album of different genres is fairly accurate but I have a considerably higher opinion of their cover version of Joni Mitchell's Chelsea Morning than he does.

It is the only album on which Judy Dybie, who died age 71 in July 2020, sings (and knits) on. Her replacement in the band made a considerable impression as we shall discover next week.

None of the songs from this album appear on The History of Fairport Convention. Now whether that is a statement as to their quality or because the compilation is on Island I shall leave for you to decide

Fairport Convention - I Don't Know Where I Stand