Second Is Better Than First. Part 12. 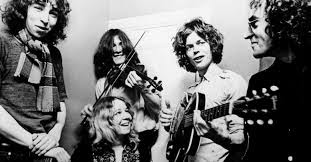 Good grief, from experimental kraut rock to english psychedelic and folk rock. My (former) good friend must be beside himself with joy! I was really put on to this band by a former friend and co-founder of our curry club. It only had three members. He recommended today’  better album to me, and it led me to a few other early Fairport Convention albums.

The debut has been likened to Jefferson Airplane, which is a bit harsh given how terrible the latter band were. But it is certainly not a folk rock album, there’s a Byrds-lite song (If stomp), definite folk songs (such as Decameron, and their murdered version of Chelsea Morning)  The female vocal, from Judy Dyble, is rather  nondescript, and it is obvious the band improved in this area with her replacement by Sandy Denny, although they definitely suffered in the on-stage knitting department with Ms Dyble’s departure. Here’s one of the more Jefferson Airplane-like songs from the album:

The next track, Portfolio, has elements of Syd Barret.era Pink Floyd!  The debut is rather a strange album, it’s lack of consistency in musical style makes it almost a compilation album of different genres. And given the overall weakness of the songs it gets a bit tedious. 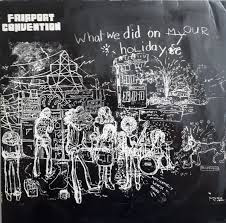 There is no doubting that What We Did On Our Holidays is a folk-rock album (oh dear GOD WHAT FRESH HELL IS THIS mutters CC), packed with splendid songs of the genre, and the rather out of place blues-ish track Mr Lacey, which in itself is a perfectly fine song. That track is sandwiched between Fotheringay and the wonderful Book Song:

How good is that??? This is the first Fairport Convention album to feature Sandy Denny (who never really released much of worth when she left the group a couple of years later). The songs where  she has the lead vocal have something special, although Richard Thomson’s guitar-playing helps a little bit.

Fairport Convention - She moves through the fair

And it would rather perverse not to include the best song on the album (Meet On The Ledge) which is exactly what I am doing today..

It’s a splendid album, and easily an example Second Is Better Than First

Anything involving Sandy Denny is alright by me. Whereas she obviously never topped Who Knows Where The Time Goes she had some very good solo songs