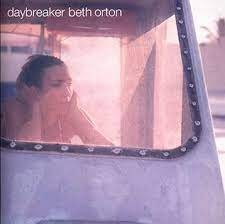 A quick visit to St Andrews yielded a couple of solid if hardly spectacular purchases.

Like Laura Marling who featured recently Beth Orton is  one of those  artists that I probably would never consider buying anything new by but would always pick up anything by either second hand or via a charity shop.

Daybreaker her third album from 2002 is the third album that she released on Heavenly and her fourth in total. It joins Trailer Park and Central Reservation on the shelves as well as the Pass in TIme compilation. I also have a CD single of Concrete Sky which is a song of this album. I think that with the exception of Traier Park that they have all been charity purchases.

It sees Beth moving from her folkier roots to a more mainstream sound and it's fair to say that it received mixed reviews. Pitchfork says that it is the  third in a series of progressively bland and unadventurous releases whereas Allmusic feels that it sacrifices immediacy for uniformity of mood and emotional tenor, and although it's perhaps her most consistent and mature work to date, it's also her least engaging, never matching the dizzying heights of her previous efforts.

After a first listen I'm fairly ambivalent .It is not as bad as some of the comments above but not a patch on its two predecessors. A commentator on Allmusic fairly accurately sums it up as she appears torn between being an electronic diva and a pure acoustic singer-songwriter.

As examples here are the title track with clear Chemical Brothers influences and  the singery songwritery God Song with guest appearances by Emmylou Harris and Ryan Adams (who she was romantically invovled with at the time).

Further listens will determine whether it is a keeper.