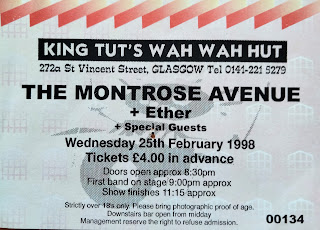 i was aware that I had a copy of the CD single of Where Do I Stand? but quite surprised to discover that I had a digital copy of  She's Looking For Me and a CD copy of their album Thirty Days Out which my filing system tells me was purchased in a Paisley charity shop a good few years later.

Not from the Angus town of Montrose but from Wokingham in Berkshire  The Montrose Avenue (don't forget the The) were very briefly an indie rock/pop band.

They were signed to Columbia.  She's Looking For Me was released in 1997 and reached  the dizzy heights of  number 118 in the UK singles charts.Where Do I Stand? was released in March 1998 and was their only top 40 hit peaking at 38 . I suspect that hearing it on the radio enticed me to go and see them. The ticket price of £4.00 probably helped.

The album was released on 12th October 1998  and reached 102 in the charts. They were more  popular in Japan where it reached number 69 . They never released another album and disbanded in 1999.

I've just given the album a listen and it is perfectly pleasant but nothing startling. For me Where Do I Stand? is the obvious stand out and puts me in mind of the Gin Blossoms.

I have no recollection of or nothing by Ether.

The Montrose Avenue -Where Do I Stand?

The Montrose Avenue -She's Looking For Me

The Montrose Avenue - Thirty Days Out