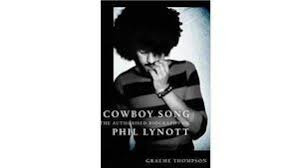 I got Cowboy Song the biography of Philip Lynott, by Graeme Thompson, out the library recently. It is the first one authorised by the Lynott Estate and is an easy but interesting read. I'm not quite sure as to why I got it out as I have never been a particularly huge fan of him or Thin Lizzy. This is probably because they became prominent in the late 70's when there were two main musical groups at school the greatcoat wearing hippies/heavy metal fans who occupied the common room and the part time punks who congregated on a small bridge near the school hall. I was in the latter group.

In many ways it is a pretty typical story much of which is well  known. The band had been on the go for a while with little commercial success until their management persuaded them to record Whiskey in the Jar which they had been mucking around  with in the studio and the rest is history. It became a bit of a mill stone around their necks and they rarely if ever played it live.

They built up a reputation as a great live band  but failed to break through to the Premier League. Then there was a gradual and later rapid decline due to Lynott's increasing heroin addiction leading to his death on 4th January 1986 at the age of 36. The shift in peoples listening habits to New Wave then New Romantics probably didn't help either.

I knew that Crackerjack legend Leslie Crowther was his father-in -law for a while but the book threw up a few things that I was unaware of. I didn't know that he was referred to as Philip as opposed to Phil or that he has a couple of poetry books published. I was also unaware that he was not in fact Irish having been born to his single parent mother in Birmingham. He was subsequently brought up by his gran Sarah in the Crumlin area of Dublin (where Mrs CC's gran also stayed) from the age of eight. He was lucky as his two siblings were given up for adoption.

The only thing I have by him is the CD  Wild One - The Very Best of Thin Lizzy. I shall spare you the ubiquitous Whiskey in the Jar and The Boys are Back in Town.