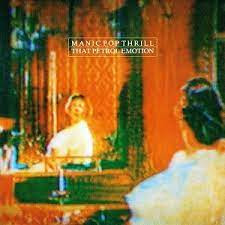 2022 Charity Shop Purchases #13 - That Petrol Emotion - Manic Pop Thrill.
Not to be confused with Manic Pop Thrills the long standing and excellent blog by Mike Melville, Manic Pop Thrill is the 1986 debut album by That Petrol Emotion on Demon Records. As I am sure that most of you are aware they were a band which contained the O'Neil brothers John (guitar) and Damian ((bass,vocals and keyboards) who were formerly in The Undertones. They were joined by Steve Mack on vocals, Raymond O'Gorman on guitar, vocals and keyboards and Cairan McLaughlin on drums and percussion
They are a band who first came to my attention via their second album Babble and in particular the single Big Decision. I subsequently picked up their third album End of the Millennium Psychosis Blues so I was pretty pleased to pick up a vinyl copy of the debut for a fiver in a Shawlands charity shop.
There is a slight tear on the cover but the album scrubbed up well
Championed by John Peel it reached number 1 in the UK Indie charts.Describer by Doxxman on Rateyourmusic.com as  some kind of perfect mix of pop, noise rock, punk, and folk balladry. In a lot of ways, it is actually perfect- on par with bands like Led Zeppelin or all over the map like Pere Ubu or The Minutemen.I'll take that, particularly the second bit.
That Petrol Emotion - Fleshprint
That Petrol Emotion -Natural Kind of Joy
Posted by Charity Chic at 08:00