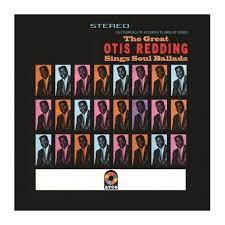 I am somewhat ashamed and embarassed that I don't own a copy of Otis Blue/Otis Redding Sing Soul . I thought that I had rectified this glaring omission when a picked up what I thought was a copy for 50p. The cover of said album was on the thin paper sleeve.
However when I put it on it was in fact its 1965 predecessor The Great Otis Redding Sings Soul Ballads. Therefore not a total disaster then as this also is an absolute belter as indeed most of his albums were .
It features both soul ballads and originals written by Otis and other Stax artists. Check out this tracklist The album features Booker T and the MGs and the Memphis Horns. It is also possible that Isaac Hayes appeared on piano although he is not credited.
I'm going for the first track made famous by the great O.V. Wright. I'm following that up with the brilliant Come to Me and finishing with Mr Pitiful a collaboration with Steve Cropper from the MGs.I could have chosen any of the 12 tracks and there would have been no diminition in quality.
This has spurned me on to track down  Otis Blue/Otis Redding Sing Soul . Not before time
Otis Redding - That's How Strong My Love Is
Otis Redding -Come To Me
Otis Redding -Mr Pitiful
Posted by Charity Chic at 08:00