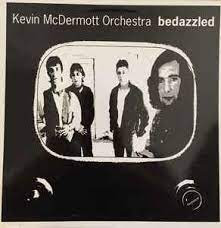 2022 Charity Shop Purchases #19 - Kevin McDermott Orchestra - Bedazzled
I am pretty late to the table when it comes to the Kevin McDermott Orchestra. It was only in October 2019 that I got round to picking up a cope of their debut Mother Nature's Kitchen some 30  years after its original release.
I've now doubled my KMO collection by picking up the 1991 follow up Bedazzled with an even longer 31 years since its  release. Good things come to those that wait.
Mother Nature's Kitchen had been released on Island. However when Chris Blackwell sold his share in the label the KMO were one of the bands caught up in the crossfire.
Bassist Marco Rossi takes up the story on the excellent Kevin McDermott Timeline : Lesser souls would have caved in, bared their throats and signed away the will to live.  Kevin McDermott, however, is made of considerably sterner stuff.  Against literally all the odds and some other hitherto undiscovered sods, the unreasonably brilliant Bedazzled(Thirteen Records, 1991) was released, revealing ensemble strengths which threw Jimi Hendrix, The Buzzcocks, The Who, The Byrds and the Small Faces into the equation.  This wasn’t Retro – this was BETTERO. A gently surreal 20 – minute video captures the band at this remove, Steadfastly moving sideways into an area outside fashion, above compartmentalisation and Beyond Belief.
The vinyl format came  in a limited edition  numbered  sleeve and the band also signed the back  in silver pen.    The limited edition also came with a copy of the Suffocation Blues LP
.My CD has best wishes Kevin McDermott on it in silver pen as well. Not bad for 50p
Kevin McDermott Orchestra -Bad Thing
Kevin McDermott Orchestra -Master of the Man
There is also a short film based on the gently surreal day to day meanderings of a beekeeper in a band...with KMO soundtrack: