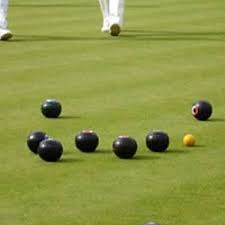 I was listening to Sounds of Goodbye by The Gosdin Brothers over the weekend and what a tremendous record it is. One of the tracks (track 18 to be precise) was the song Bowling Green.
It struck me that I had played this song fairly recently as there is a version on The Virginian the debut album by Neko Case and her Boyfriends.
Further exploration told me that it was in fact a song by The Everly Brothers and a copy of the original was duly tracked down.
Somewhat disappointedly it is not a song about the surface on which lawn bowls are played and which are not uncommon in most towns and villages in the UK - that is those that haven't yet been sold for housing.
Rather it is a song about Bowling Green a city in Kentucky  with a population in the 70,000s  and which houses the assembly plant for Chevrolet Corvettes. It is also the home of Western Kentucky University whose bowling green is featured below

I have a Blues record by Bowling Green John Cephas & Harmonica Phil Wiggins who I once saw playing at Glasgow's CCA. The record does not have a song about Bowling Green but does feature one about Richmond which is a mere 129 miles away - a  hop, skip and a jump in US terms.
The Gosdin Brothers - Bowling Green
Neko Case & her Boyfriends -Bowling Green
The Everly Brothers -Bowling Green
Cephas & Wiggins - Richmond Blues
Posted by Charity Chic at 08:00