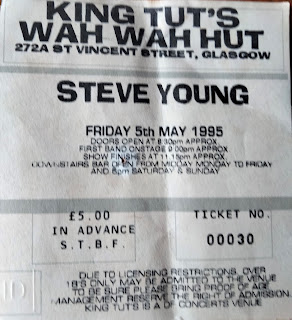 A couple of weeks after seeing last week's featured artist Kingmaker I found myself back at King Tuts on a Friday night for something completely different. This time round I was here to see grizzly Honky Tonk country artist Steve Young.

My ticket number says 30 but there can't have been much more if any in the audience.I suppose that Tuts is not a natural venue for veteran country singers.Nevertheless being the old pro that he was he performed as if it was a full house and put on a terrific show.

Widely seen as a pioneer of country rock and  alternative country he was part of the Outlaw movement in the mid 70s which saw the likes of Waylon Jennings and Willie Nelson become international superstars. I have him in the Americana as opposed to mainstream Country section of the shelves.

Steve unfortunately never reached such dizzy heights. Indeed, he is probably better known as a songwriter rather than a singer with The Eagles covering his Seven Bridges Road and Hank Williams Jr  covering Montgomery in the Rain among others.

His first solo album from 1969 Rock, Salt and Nails featured the likes of Gram Parsons, Gene Clark and others from the Laurel Canyon scene. I have his 1975 album Honky Tonk Man on the Mountain Railroad label as well as 1991's Solo/Live on Watermelon in the States and Demon in the UK.

Steve Young - Montgomery in the Rain