It's a Wonder Tall Trees Ain't Layin' Down 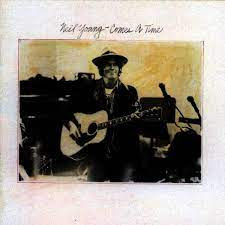 Another purchase from the Phillies record fair was Comes a Time a country folk album from 1978 by Neil Young.The first song on side 1 sticks a little at the end but this was reflected in the price. Other than that it is in pretty good nick for for a 44 year old record. I've just noticed in the corner the name Sandra Strachan written in pen Presumably the original owner and hopefully still with us

Now in 1978 country folk would probably have been the second last thing, after prog rock, that I would have listened to.Fortunately I'm now older and wiser. This one meets Mrs CC's approval as she likes the gentler Neil Young stuff and has no time for when he gives it a bit of welly. Me, I like both.

Not really much more to say other than it is a welcome addition to the shelves.It was his ninth studio album and as always was on the Reprise label. I suspect that most of you will recognise these two numbers. The late Nicolette Larson is  on harmony vocals for the title track with a restrained Crazy Horse in situ for the other.

Neil Young -Look Out For My Love