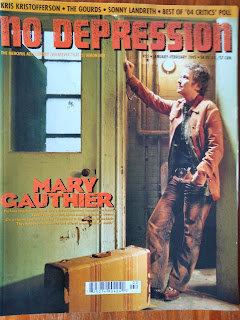 #55 -   January to February   2005
I did a bit of a double take when I saw that we have now reached 2005 in this series. We are now much nearer the end than the beginning.
The cover star for this issue is singer songwriter Mary Gauthier primarily because  her fourth studio album Mercy Now was due for release on 15th February. It was her first mainstream album and on the Lost Highway label, so no surprise there. Not bad for someone aged 42 who spent her 16th birthday in a detox unit and her 18th in jail. Her many and varied life experiences provide the ammunition for some great songs.
I don't have Mercy Now. The extent of my Mary Gauthier collection is her second Drag Queens and Limousines from 1999 one of my 50 Americana albums to hear before you die and her third Filth and Fire from 2002. I also saw her live twice during that period.
I was familiar with the title track and also I Drink a version of which is included on Drag Queens and which is the one attached below It is often thought that this song is autobiographical but she says that she wrote it with a male character in mind. The album is produced by Gurf Morlix who also produced Lucinda Williams and it not hard to see certain similarities between the two of them and their songs.
One each from the aforementioned three albums
For the One from the Top I'm sticking with the letter G and The Gourds although I don't have any albums by them. This song of one of two of theirs which feature on the awesome Awsome - A Munich Records Compilation from 2001. Somewhat confusingly Munich Records is actually a Dutch label!.
Mary Gauthier - I Drink
Mary Gauthier - Camelot Motel
Mary Gauthier - Mercy Now
The Gourds - Hey Little Light
Posted by Charity Chic at 08:00