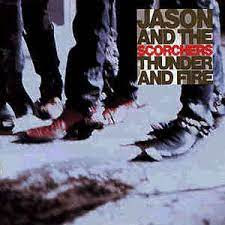 That's the latest batch of charity purchases exhausted so it is back to another one picked up at the recent record fair at Phillies.
Thunder and Fire from 1989 and on the A&M label is an album by Country Rockers Jason and the Scorchers and is the second one of theirs I have picked up from that source Lost and Found being the other one back in 2019.
Despite playing shows with Bob Dylan to promote the album it wasn't a commercial success. Indeed despite releasing a number of decent albums they never really made that jump. The band subsequently broke up after this album prior to reforming in the mid 90s.
I think that Bible and a Gun, which was co-written with Steve Earle, may jump slightly in places so be way of compensation I'm throwing in the version from Jason Ringenberg's 2002 solo album All Over Creation.
I've seen Jason performing solo on a couple of occasions but sadly I have never seen the Scorchers

Jason & the Scorchers -When the Angels Cry

Jason & the Scorchers -Bible and a Gun

Jason Ringenberg (with Steve Earle) - Bible and a Gun