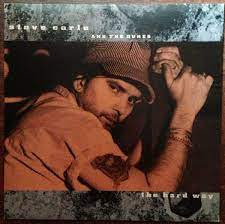 I've had The Hard Way the 4th album by Steve Earle and the Dukes from 1980 and a 12 inch of the track The Other Kind on vinyl from just about when they came out. I wouldn't say that it is one of his best ones given that it is poorly produced and there are not that many stand out tracks on it.Some folk buying it following the success of Copperhead Road probably came away disappointed. The debut Guitar Town is the must have from that period

I'd never seen it before on CD until I saw it in a Newton Mearns charity shop for 50p. Despite already having it . it seemed foolish not to. My spreadsheet has thrown up a potential new series - Albums I have on both vinyl and CD. I couldn't not add Mr Earle to the list.

For your listening pleasure the aforementioned The Other Kind. This is followed by Billy Austin the first of three death penalty songs that Steve has written. There is a better version of  this on his 1991 live album  Shut Up and Die Like an Aviator. Described by the Dallas Observer as storytelling at its stark,bleakest best.

Steve Earle & the Dukes - The Other Kind