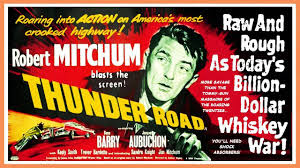 Last Monday when I featured Thunder and Fire by Jason & the Scorchers Alyson and Walter both got awfy excited when they saw the title thinking that it may have been the return of one of my compare and contrast series. Rol quite rightly pointed out that Thunder and Lightning would be more appropriate.

Anyway I had a look in the music file to see what there was in the Thunder file (there were plenty with Fire). Not much was the answer. There is some stuff by Johnny Thunders and also the Fabulous Thunderbirds. As far as songs were concerned there was Thunder on the Mountain by Bob Dylan which featured earlier this month and another three plus a couple about thunderstorms.

And obviously there was Thunder Road by Bruce Springsteen. I'm not sure why it didn't feature in my Springsteen Covered series particularly as I have two covers.Maybe it because they are not on the same planet never mind ballpark as the Boss.