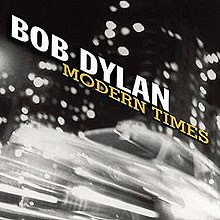 2022 Charity Shop Purchases #16  - Bob Dylan - Modern Times
I think that I have mentioned in passing a couple of times that I am in the process of developing a database for my music.
I've not gone down the Discogs route but rather have developed my own somewhat convoluted database both as a retirement project and to keep my limited IT skills intact.
I started by putting in new purchases and anything else by that artist and some random entries. I then decided that it would probably be better to start with A and record everything alphabetically. I'm now at D.
This has turned out to be quite handy as during a recent visit to a local charity shop there were two Bob Dylan CDs namely Modern Times  (2006) and Together Through Life (2009) Now I knew that I had both on the shelves but that one was a burn. The problem was  that I couldn't remember which one.
Fortunately I have been saving the most up to date version of the spreadsheet on Google Drive which means that I can access it from my phone
The spreadsheet was duly checked showing that Modern Times was in fact the burn. Modern Times was duly purchased.
Modern Times indeed.
Bob Dylan - Thunder on the Mountain