Fairport Friday - What We Did On Our Holidays 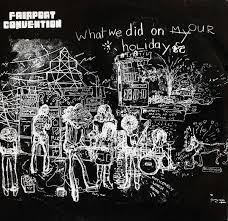 Now this is more like it. Fairport Convention's second album What We Did on Our Holidays was released in January 1969 and was the first of three absolute classic albums released by the band in that calendar year. Has any other band ever had a year like that?

The personnel was the same as the debut album with one crucial difference. Judy Dybie had left the band and was replaced by Sandy Denny. Not that Judy was bad but Sandy with her singing takes the band to a whole different level, or even stratosphere.Also, it was an out and out folk rock album as opposed to the musical hotchpotch on the first one.  I'm not sure that it is  crucial but it was also the first of their albums on the Island label..

Sandy also wrote the opening track Fotheringay which was to become the name of the band she set up with boyfriend Trevor Lucas when she left the band in 1970. Note to myself - one for the must have list.

Fotheringay Castle was where Mary Queen of Scots was executed and is the name of a street, and formerly a pub, on Glasgow's southside in the vicinity of the Battle of Langside

Like George I'm not sharing Meet on the Ledge not because I'm contrary, like him, but because there are plenty of other good songs to choose from.

Another classic from 1969 next Friday? I think so.

Fairport Convention - She Moves Through the Fair