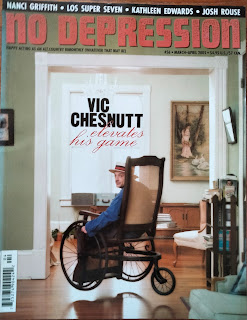 #56 -   March to April  2005
The cover star article starts with the words Vic Chesnutt has defined himself with music that can't be defined.
Well thanks a lot.That is going to make things doubly difficult given that I don't know much about Vic and have only managed to track down three songs by him from various compliations.
One is taken from a New Music from New West sampler and is a song called Virginia from the 2005 album Ghetto Bells which is handy as this is the album featured in the article.
I'll let New West give you the blurb so that I don't have to
Ghetto Bells matches the poetic power of Vic Chesnutt’s words with some of the most elegantly simpatico backing he’s ever been blessed with, including jazz icon Bill Frisell on guitars, legendary writer, arranger and multi-instrumentalist Van Dyke Parks on piano, accordion and organ, Don Heffington of Lone Justice and the Jayhawks on drums and percussion, classically trained session-man Dominic Genova on double bass, Tina Chesnutt on electric bass and Liz Durrett on exquisite backing vocals. At the time, Vic Chesnutt had released a dozen albums in 15 years. Ghetto Bells has a powerful resonance that reveals itself slowly.
Pitchfork are less complimentary
Vic Chesnutt can do a lot with a somber dirge. The 11 tracks on his 12th album plod soddenly, leaden of pace and bleak of atmosphere. Drawn-out running times and a uniform midtempo crawl can test the patience of even a devoted listener, so it's a testament to Chesnutt's intricate and intelligent songwriting that Ghetto Bells is listenable at all.
Despite that they give the album a credible 7.5/10.
He provided producer John Chelow with around 50 demos .Chelow selected 11 that he expected might work together to capture what he wanted to evoke - namely night time.
In addition to Virginia I tracked down Stay Inside from an Uncut compilation Only Love Can Break Your Heart and Danny Carlisle from the Rough Trade Singer Songwriter 1 compilation.
Vic was in a wheelchair and quadraplegic from the neck down following a drink driving accident .He could still play guitar but only basic chords.Sadly he died on Christmas Day 2009 following an overdose of muscle relaxants. He was 45.
For the One from the Top I've gone for Canadian singer songwriter Kathleen Edwards with 12 Belleview from the same Uncut compilation.
Vic Chesnutt - Virginia
Vic Chesnutt -Stay Inside
Vic Chesnutt - Danny Carlisle
Kathleen Edwards - 12 Bellevue
Posted by Charity Chic at 08:00