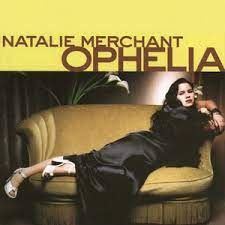 Following the recent Motherland incident I took the precaution of  cataloguing  the Natalie Merchant CDs even though I am still only up to H a part of the larger plan. This proved to be very fortuitous as I was able to ascertain that the copy of Ophelia ,her second solo album from 1998 on Elektra, was a burn and it was therefore duly replaced by the CD on the shelves of the Sense charity shop in St Andrews

Her website advises that she experimented with string arrangements , horns and collaborated with a wide array of musicians.It helpfully lists them so I don't have to. It was self produced and she  treated the recording as a series of workshops, where she would invite various musicians she had met over the years into her home studio to collaborate and record. While Ophelia is not a concept record in the traditional sense, the name of the album and the title track are a literary reference to Shakespeare's Ophelia

The album was released just prior to her collaborating  with Billy Bragg and Wilco on Mermaid Avenue putting previously unreleased Woody Guthrie songs to music. She was also heavily championed by Andy Kershaw around this time.