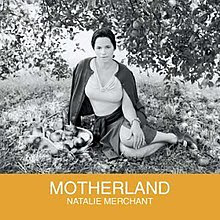 2022 Charity Shop Purchases #18 - Natalie Merchant -Motherland
Given that the data base has not made it as far as M yet I had a doubler situation on my hands recently..
There are a few CDs by Natalie Merchant, the former frontwoman of New York band 10000 Maniacs on the shelves. They are a combination of burns and yer actual CDs. I knew that Motherland her third solo album from 2001 on the Elektra label was one of them. I was pretty sure that it was one of the actual CDs but not quite 100% sure.Given that it was only 50p and with encouragement from Mrs CC and the shop assistant I took the plunge.
So a doubler then but it will be recycled to charity and it  also gave me a push to give it a listen to and enjoy it for the first time in a while. Plus, I don't think that this particular album has featured here before.
Her solo stuff is more sparse and folky than her stuff with 10000 Maniacs but is none the worse for that..
The title track, featured below has since been covered by Joan Baez and Christy Moore, so definitely Folk then!
Natalie Merchant - Motherland
Natalie Merchant - Tell Yourself
Posted by Charity Chic at 08:00