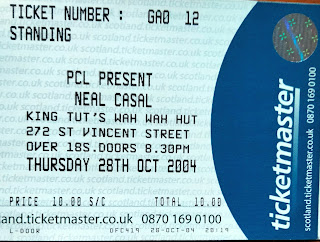 Neal Casal
Thursday 28th October 2004           £10.00                       Ticket No  GA0 12
I'd previously seen Americana singer/songwriter Neal Casal at Glasgow's 13th Note Club so King Tuts was very much a step up in terms of size and status
His 2000 album Anytime Tomorrow has long been a   favourite of mine and I had enjoyed the rockier 2003 album that he had released as part of the band Hazy Malaze alongside Dan Fadel and Jeff Hill.
He released a compilation Leaving Traces :Songs 1994- 2004 which may well have been promoted at the gig and almost certainly contributed to a major part of his set.I may even have picked it up at the show.
I kind of lost touch with him shortly after this although I have his 2006 album NoWish to Reminisce which I think George gave to me.
In addition to the above he played as part of numerous bands most notably with Ryan Adams and the Cardinals and the Chris Robinson Brotherwood. I once saw him playing guitar as part of Lucinda Williams backing band in Austin.
Sadly he took his own life at the age of  50 in August 2019.
Coincidentally I have just recently downloaded Highway Butterfly a tribute featuring 41 of his songs from artists including Hiss Golden Messenger, Steve Earle, J Mascis and Jonathan Wilson which I haven't had a chance to listen to yet. An artist who was clearly held in high regard.
A couple of his songs that would have almost certainly been part of the set and one by Hazy Malaze.
Neal Casal - Maybe California
Eddy & Diamonds
Hazy Malaze -What If Today Was Tomorrow
Posted by Charity Chic at 08:00