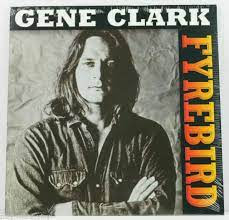 A couple of years ago I finally got roiund to picking up Gene Clark's classic 1974 album No Other and it certainly didn't disappoint.
A few weeks ago I took the opportunity to pick up a re-release of the album Fyrebird which was originally some 10 years later on from No Other
It is not bad but obviously not in the same league as No Other. There are new interpretations of Byrds classics Mr Tambourine Man and Feel a Whole Lot Better.
You will be pleased to know that he is still banging on about Ravens.. Following on from No Other's White Raven we have Blue Raven with the lyric this time the reaven is not white this time the raven's blue.Glad we sorted that out.
I have been on a bit of a Gordon Lightfood trip recently.An artist who is not that dis-similar to Gene. I featured his Sundown just before Christmas.
His song If You Could Read My Mind is the theme song to the quirky and Fargoesque Australian drama The Tourist which is currently on the BBC.Gene does a fairly faithful cover.
AllMusic describes Fyrebird as an artistic triumph and a commercial disaster. Despite that they only give it 3/5 which I feel is pretty much spot on. Glad I bought it though.
Gene Clark - Blue Raven
Gene Clark -If You Could Read My Mind
Posted by Charity Chic at 08:00