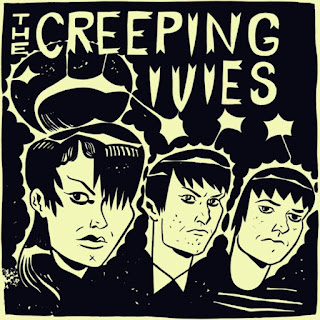 Having a trawl through my Bandcamp collection I stumbled across The Witch House an EP from 2015 from Scottish band The Creeping Ivies that I'd forgotten I had.
They are not a band that I know much about .Some internet trawling tells me that the lead singer and guitarist is Becca Murray with Ian Duncan on drums and Christy Taylor on bass.
There are obvious comparisons with The Cramps with  Louder than War describing them as having a raw feral sound that's difficult to ignore. They also describe the EP as a fantastic slice of sleaze that is aching to be heard.
The bands Soundcloud page states that they play the kind of balls out garage punk rock that could very well exist in 1978 at CBGBs
That's good enough for me.
I can't find any evidence of them having released anything following this but they have a reasonable  back catalogue going back to 2011 that you can pick up on Bandcamp

A good way to end the first week of the year. I think this might be right up C's street.

The Creeping Ivies -The Witch House

The Creeping Ivies - Only the Moon