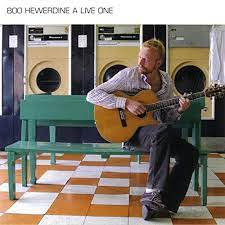 By rights this should have been the first 2002 CD to feature as it was the first charity shop purchase this year. However techical problems, as detailed yesterday,saw it relegated to number 2. Thankfully they now appear to be sorted.

Boo Hewerdine is a terrific songwriter and an excellent singer and has appeared here several times before either with one of his songs being covered or in his own right. His last appearance was in March last year where he was well received.

From a charity shop in Cupar  A Live One cost me £1.99 which I initially thought was a bit steep. However,it was still sealed and therefore had never been played which is pretty strange considering it was first released by Madan Records as far back as 2002.

Never mind your Hammersmith Odeon or your Shea stadium this one was recorded at the Ram Folk Club, Claygate in what Boo described as a scout hut, on September 21st 2001.

Here is Graceland, a song he recorded with hi band The Bible, and Please Don't Ask Me to Dance. Terrific stuff