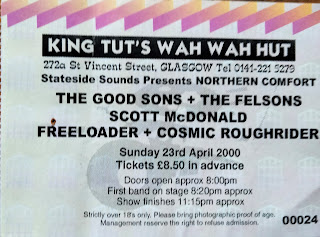 Northern Comfort was an evening of primarily Scottish Americana acts many of whom have appeared here before particularly in my Tartan Texans series from the early days of the Blog.

Given that the headline acts are at the top of the bill we will start at the bottom and work our way up.

Cosmic Roughrider is clearly a mis-spelling of Cosmic Rough Riders. From Castlemilk in Glasgow they were formed in 1998 and had their first album Deliverance in 1999.They shot to prominence with their third album 2000's Enjoy the Melodic Sunshine being released on Alan McGhee's Poptone label.It was not released until November or else presumably they would have been considerably further up the bill.Former front man Daniel Wylie is still going strong

Freeloader were also known as Alan Eaglesham & Freeloader reflecting the fact that there is more than one band with this moniker. I have their 2000 album Turn of the Century songs from which I would imagine constitued their set.

Sticking with all things Eaglesham singer/song writer Scott MacDonald is from the village just to the south of Glasgow with that name close to where I grew up and even closer to Mrs CC's childhood home.Scott is still performing with stuff available on Bandcamp. Here I am featuring the title track from his 1999 EP Burn Baby Burn.

The Felsons have featured many times here. Led by Dean Owens, who has enjoyed a reasonably successful solo career, they are one of the bands I have seen most often at King Tuts as they were often wheeled in as the support to visiting Americana acts..

On the subject of visiting Americana acts The Good Sons were the only non-Scottish act on the bill. They were from the Manchester/Preston area and named after a Nick Cave album. I have a solo album by frontman Michael Weston King and didn't think I had anything by the band until I discovered Angels in the End on a compilation.

My memory is not as good as it was but I have a feeling that The Good Sons didn't show. Happy to be proved wrong

Freeloader -Turn of the Century

The Felsons - One Step Ahead of the Posse

The Good Sons - Angels in the End