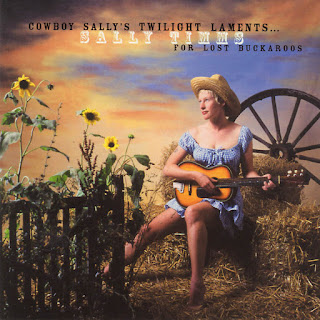 Sally Timms is probably best known for having been a member of Leeds post punk band The Mekons.
In the early 90's she and fellow Mekon  Jon Langford moved to Chicago and became immersed in the musical and art culture there graduating to Bloodshot Records. She recorded an EP with Langford called Songs of False Hope and High Values and also featured as part of the Pine Valley Cosmanauts.
She recorded under her own name and as Cowboy Sally after a character she played on a TV show.Cowboy Sally's Twilight Laments for Lost Buckaroos was released by Bloodshot in 1999  and is primarily an album of covers.
She was obviously a big fan of the Handsome Family, and the lyrics of Rennie Sparks as in addition to The Sad Milkman she also covers Snowbird and on her EP Cowboy Sally she sings Drunk by Noon.
You will all recognise Cry Cry Cry a song by the late great Johnny Cash but are probably less familiar with In Bristol Town One Bright Day a song by fellow Chicagoian Robbie Fulks.
I'll finish with a quote from the Chicago Reader which says that she celebrates the long tradition of singer as stylist .. the ethereal sweetness of her tone is cut with the hint of some unbearable sadness that words alone could never convey.
Sally Timms - The Sad Milkman
Sally Timms -Cry, Cry ,Cry
Sally Timms -In Bristol Town One Bright Day
Posted by Charity Chic at 08:00