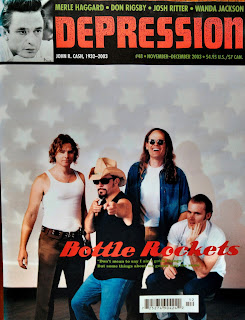 No Depression - The Bi-monthly Journal of Alt- Country
#48 -   November - December 2003
This edition's cover pays homage to one of those bands who seem to have been about for ever but who have never quite "made it" for one reason or another.
The Bottle Rockets were formed in 1992  and have been on the go in some shape or form ever since releasing about a dozen albums in the process. They have true Alt-Country  legendary status with front man Brian Henneman having played on Uncle Tupelo's March 16-20, 1992 album and then on Wilco's debut album AM.
The article concentrates on Blue Sky their 2003 seventh album their first and as it turns out their last album on the Sanctuary label. They then featured regulalry in the Bloodshot stable from 2006 until 2018.
I don't have Blue Sky .Indeed I don't have much be them at all just a few songs from various Bloodshot samplers and a copy of  their 2011 album Not So Loud -An Accoustic Evening with the Bottlerockets which George shared with me. Not much to go on then. I hsve a feeling that I may have seen them live but I couldn't swear on it
The major shock in the article is Henneman professing a fondness for David Gates and Bread with comparisons to Neal Young!
This week's One from the Top is the Queen of Rockabilly herself Wanda Jackson proving that she could also belt out a country tune
You will notice the inset at the top left of the cover acknowledging the death of Johnny Cash which is also covered in the editorial and in an obituary.Former son-in-law Rodney Crowell  thinks featuring on Mount Rushmore would be a fitting tribute.Nate Clesowich duly obliges 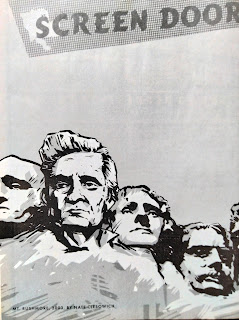