Too Long in the Wasteland 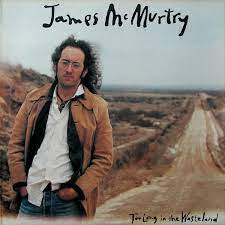 Rol pulled a rabbit out the hat when he announced that The Horses and the Hounds  by James McMurtry was his number 1 album from 2021.
He stated that James McMurtry is an artist who has existed on the periphery of my vision until now. I've got a couple of his albums in my collection, but I obviously haven't devoted enough time to them to pick up the finer details of his craft
That could have been my that wrote that, but obviously not so eloquently.
I'd heard snippets of his work here and there and in particular Ray Wylie Hubbard's cover of Choctaw Bingo. This was enough for my to track down his 1989 debut Too Long in the Wasteland although curiously I have only ever followed that up with a copy of 2015's Complicated Game.
The album title and cover give a clue as to what to suspect. He is primarily a storyteller telling  grizzly tales about the dispossessed and the American way of life that never features in the Hollywood blockbusters.
As AllMusic has it his lyrics are stories, telling about everyday life, the predictability of work, the troubles of teens, and the pain of love when it isn't all roses and sunshine. Maybe some of his writing talent comes from his father, author Larry McMurtry.
I've just discovered that the album was produced by John Mellencamp. Maybe that's another reason why Rol likes him so much!
As I often say on these pages further exploration clearly required.
James McMurtry - I'm Not From Here
James McMurtry - Too Long in the Wasteland
Posted by Charity Chic at 08:00