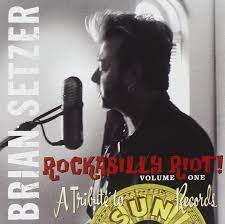 Some great Sun Records era rockabilly for you today but with a slight twist.
No, it is not from the late 50's but rather from 2005 where we find erstwhile Stray Cats front man Brian Setzer paying tribute to some of the rockabilly greats on Rockabilly Riot! Volume 1 - A Tribute to Sun Records on  the Surfdog label. And it is a pretty faithful tribute at that.
Red Hot was written and recorded by Billy "the Kid " Emerson and released by Sun in 1955.It was covered many times probably most notably by Billy Lee Riley.
Mr Riley also came away with Flyin' Saucer Rock'n'Roll.
Carl Perkins was one of the bigger stars on the Sun Roster and was famously one of the Million Dollaer Quartet alongside Elvis Presley, Jerry Lee Lewis and Johnny Cash. Put Your Car Clothes On was one of his biggest hits.
Perhaps the most obscure of the four is Peroxide Blonde in a Bopperd Up Model Ford originally recorded by Jumpin' Gene Simmons  not to be confused with the  much less talented member of Kiss with the same name.
I had originally intended to give you Ignition! by Brian Setzer's '68 Comeback Special but my burning software was playing up. Some other time hopefully.
Brian Setzer - Red Hot
Brian Setzer - Flyin' Saucer Rock'n'Roll
Brian Setzer -Put Your Cat Clothes On
Brian Setzer - Peroxide Blonde in a Bopper Up Model Ford
Posted by Charity Chic at 08:00