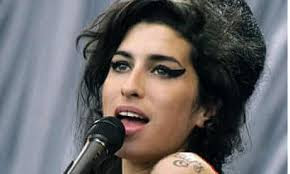 We will start with one of the more obvious ones  this week namely the late great Amy Winehouse. The sad story of her far too short life has been documented many times before and you don't really need me to delve into it. All I will say is that she was a fantastic talent and a great soul singer, but you knew that already. There is a song on her debut album Frank called Amy Amy Amy but I was unable to record it without including the Outro

Actress, singer songwriter and upright bass player Amy LaVere first came to my attention when her song Rabbit popped up on an Uncut compilation. I subsequently sought out her 2014 album Runaway's Diary on Archer Records.It's not bad but none of the other tracks come close to Rabbit

As you will see from the post title I am allowing deviations from the traditional spelling.I was really surprised that out of all the thousands of physical and digital songs at my disposal I couldn't find a copy of the disco classic Knock on Wood by Amii Stewart despite having about half a dozen Disco compilstions. Remedial action has been taken.

I think I can probably just about squeeze in a third selection next week.

Amy Winehouse -Tears Dry On Their Own