The Only Ones -Peel Sessions 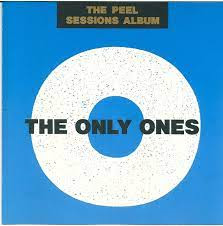 It is an undisputated fact that Another Girl, Another Planet by The Only Ones  is one of the best songs of all time. It would certainly feature as part of my Desert Island Discs selection.

I suspect that most people would struggle to name another song by them but they certainly weren't a one trick pony. Having said that AGAP was certainly a hard act to follow.

I already had their self-titled debut album but when The Peel Sessions album came out on Strange Fruit came out in 1989 I requested it for my Christmas. This led to my mum's one and only visit to the Virgin Megastore on Glasgow's Union Street.

In case you are wondering I visited my  charity shop of the year the other day but came away empty handed.

The Only Ones -Oh Lucinda (Peel Session)

The Only Ones -Language Problem (Peel Sssion)

The Only Ones - Lovers of Today (Peel Session)