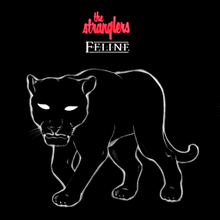 I was watching a video flick through of records for sale when I saw Feline by The Stranglers going for 9 quid.

I've got that I thought and the other day I dug it out for a listen. I couldn't remember how or where I had got it or whether I had ever listened to it before.

From 1993 on Epic it is their 7th album and is as far removed from Rattus Norvegicus and No More Heroes as you could possibly imagine.It is maybe of its time experimenting as it does with electronic drums and synthesizers

Released to a mixed reception with Trouser Press describing it as restained and dignified but also lackluster and boring which is probably fair. All Music wrote while not an instant classic, it does repay repeated listening ... Instead of the belligerent tunefulness of yesteryear, the Stranglers were trying to expand their sound and reach. Too often on this lackluster effort, however, it comes across as boring and unengaging

The European Female, with vocals by Jean-Jacques Burnel, reached number 9 in the UK singles chart and just about passes muster. The rest is much of a muchness. It comes with a one -sided spoken single called Aural Sculpture Manifesto.

If anyone was daft enough to offer me 9 quid I would bite their hand off. An excellent cover though.

The Stranglers - The European Female

The Stranglers -All Roads Lead to Rome