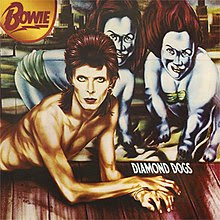 No, not the first thing Boris Johnson said following his apparent Covid hospitalisation but rather the opening lines to the title track of  David Bowie's last glam album. Johnson has probably also crawled down  a few alleys on his hands and knees.
From 1974 Diamond Dogs was recently purchased alongside Low from a Twitter chum to plug two of the few remaining gaps in the Essential Bowie must haves. I'm just about there now.
Less than a year later he would be heading in a completely different direction with Young Americans
There was no Mick Ronson on the album leading to Bowie playing guitar. I think he made a pretty good job of it. Tony Visconti was back in the production saddle. Oh, and a pretty neat cover to boot.
Some essential stuff on here not least the three singles from the album namely the majestic Rebel Rebel (which criminally only peaked at number 5), the title track  and 1984. Interestingly, having been denied the rights for an adaptation  of 1984 by George Orwell's widow he devised an urban apocalyptic scenario based on the writings of William S Burroughs. (Wiki).
Good preperation for The Man Who Fell to Earth as well.
He really was the great chameleon.
David Bowie -Rebel Rebel
David Bowie -Diamond Dogs
David Bowie -1984
Posted by Charity Chic at 08:00